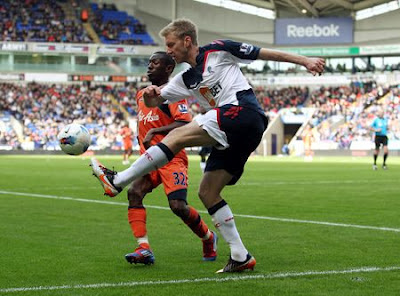 Just 6 days away from "Survival Sunday" and things look decidedly grim for at least one team in the English Premier League that houses Americans: Bolton Wanderers. This is specifically significant because it would mean that two of our younger soccer stars would begin the next season in the second division: Tim Ream and Stuart Holden.

For Tim Ream, it has been a whirlwind couple of years. From draft pick in 2010 to a rise as a new center back option for the national team in 2011, to struggles in the latter half of last year, and finally, a transfer to the Bolton Wanderers of the Premier League. Stuart Holden, the former Houston Dynamo creative midfielder has been playing for Bolton for the past two years and was a key to their success during the 2010-2011 season. Unfortunately, he has been plagued by injuries and hasn't been able to help his team.

Another team that was in threat of relegation was Aston Villa. The Villans were almost in the bottom three until this weekend's tie versus Tottenham Hotspur gave them the point to breathe a sigh of relief. Villa is home to another great American prospect: Eric Lichaj. The young right back has been seeing consistent playing time and even scored a goal a few weeks ago. His versatility as a defender means that he can play either wing and is a good--although not natural--option at left back for the national team. Along with Danny Williams, Fabian Johnson and Timmy Chandler, Lichaj forms the nucleus of the outer defense for Klinsmann as World Cup qualification gets underway.

The final weekend of the Premier League looks to be epic at this time. Bolton will be away at Stoke City. Only a win, coupled with a Queens Park Rangers loss to Manchester City, will allow them to remain at the top flight. For QPR, the stakes are high since Manchester City will look to take all three points at home to secure the trophy. And, after watching their recent matches versus top competition, it is likely that City will win. Since Manchester United will be away to Sunderland, it is plausible that they may not get all three points. Nevertheless, nearly all teams at the top and bottom of the table will be playing for meaningful positions, be it a place in the Champions League, the Premier League title, or safety from relegation.

Good luck to everyone. This should be fun.
Posted by R. Mera Velásquez at 2:23 AM