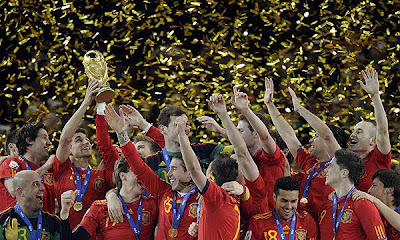 Yellow and red because those are the colors of the Spanish flag and the flag of Catalunia. Yellow and red because Webb, the referee, decided to give out a myriad of punishment cards (12). Most notable was the red card for Heitinga deep into extra time. Spain was victorious today because of the whole of the team. . . and they taught us how to play soccer once again.
There would be no Fernando Torres starting today. Most of us knew that. But was Pedro the right call? He had shown a bit of trepidation in his play. Maybe he wasn't ready for the big screen. Llorente and Navas were the other options. Navas would come in to add some spark to the game. 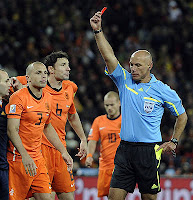 No winning goal from Torres, not this time. No sixth goal for David Villa, he would settle for five in this World Cup. No heroics from Sergio Ramos, Carles Puyol or Gerard Pique. No magic from Xavi or Xabi Alonso. It was Iniesta this time, and just in time. The man that sent Barcelona to the Champions League final in 2009 was the man that would give his country the one tournament they always knew they could get but had not been able to acquire. Gooooooooal! We screamed and cried and laughed as the net opened its petals when the ball hit the polyester strands. Spain would win it without penalties. Spain would redeem soccer once more and bring the beautiful game back to the glory it deserves.

Another chapter in world football closes today. Another four-year cycle comes to a close. We return to our everyday lives and begin to train our hearts and minds to dream once more. Maybe your country can go far in 2014. Maybe your country can win. Now we watch our players grow and fall and score and cry so that they can share the dream. This is why we love this game.