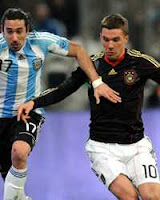 There are favorites in every tournament, the usual suspects: Brazil, Argentina, France, Italy, Spain, Germany. Always on the horizon is Holland, the one team many claim the best nation never to win a tournament. Of the above only Germany and Spain survive. Uruguay is reliving its glory days of 40 years ago with its first semifinal berth since 1970.

Certain patterns always emerge during World Cup cycles. For the past 36 years, for example, no team that has won the cup has lost a single game. Only one team in the 80 year history of the World Cup has won the title after losing a match: West Germany. Curiously enough, it was against fellow-finalists Hungary in 1954 and against the recently-deceased East Germany in 1974. So, contrary to previous posts, it actually is possible for a champion to lose during the tournament. The question is this: will it be Germany or Spain? As the saying goes, there can be only one.

It will be Klose-Podolski-Ozil versus Xavi-Iniesta-Villa. Germany may be fast, impressive and young. Spain, however, is a more complete team. All of Spain's players are world-class individuals. Germany can't say the same, although their collective spirit has dismantled soccer powers like Argentina and England. Do remember, however, that the Germans were pushed to the brink by Ghana and were deflated and defeated by Serbia during group play. Spain has been less than impressive during this tournament except during the Honduras game and the first half versus Chile. Germany must contain the considerable power of Spain's attack and exploit the so-far sub-par performances by Puyol and Pique, as well as Sergio Ramos' frequent excursions into the offense. Spain needs to score, plain and simple. Torres may not start the match due to lack of form.

On the other side of the coin (tomorrow's semifinal) are Holland and Uruguay. These two teams are unbeaten. Uruguay has been particularly impressive after defeating Mexico, South Korea and South Africa following a 0-0 draw versus ill-fated France and a controversial win against African darlings Ghana. Keep in mind that Fucile may not play (injury) and Suarez is unavailable due to suspension after his goal-line handball at the end of extra time versus Ghana. The team is tired and stretched after their quarterfinal game, although with plenty of confidence. The Netherlands have steadily grown stronger throughout the tournament. No multi-goal demolition of their opponents, no flashy forwards like David Villa, just a solid squad that has addressed its shortcomings in defense and that has taken care of things in the midfield. Wesley Sneijder, "Best Player of the Tournament" candidate derailed heavily-favored Brazil thanks to his partner in crime--Arjen Robben. This one-two punch along with Van Persie, Dirk Kuyt and Huntelaar may be too much for a weakened Uruguay defense. On the other hand, Uruguay has a knack for major upsets (Maracanazo in 1950).

Four games are left. Only one can be crowned champion. Were Uruguay and Germany to lose, we would have a first-ever champion, something that has not occurred since France won the tournament in 1998.
Enjoy.
Posted by R. Mera Velásquez at 3:12 PM

Forget that foolish comment, who knew Germany would play to lose today?

I had been saying it from the beginning--Spain is truly the best and most complete team and should win it all. Only the Dutch stand in their way now...and they're not gonna play defense like Germany did today.