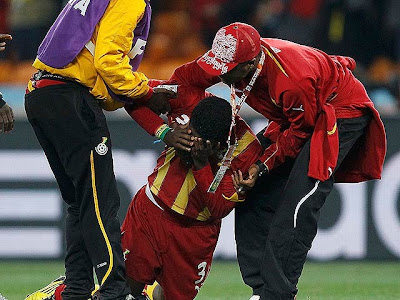 Ghana lost today on penalties even though they deserved the win. That's why, sometimes, we hate this game. It's also why we love it. Uruguay was a worthy opponent, true to their roots of unnecessary fouling and last-ditch efforts, gifted strikers and ambitious defenders.

Africa lost today. Again stopped short in the quarterfinals. It was Cameroon in 1990 against Gary Lineker's England in one of the best quarterfinal matches in history. In 2002, Senegal surpassed group and round of 16 play only to be derailed by a surprising Turkish team. But the Ghana of today is a different kind of team. More gifted than those two squads, exceedingly fast and athletic, and most of all... younger.

To the fans it is a heartbreak. To South Americans it's another triumph. A wise person once told me that soccer is like life, sometimes you win and sometimes you lose. Eighty-four thousand people shed tears today at Soccer City. Behind them an entire continent. This game was for the fans listening to the game on a beat-up radio in the Sahara desert, to the farmers clearing fields in the Sahel, to the adventurous city-dwellers from Accra to Kampala, to the bars in South Africa, and to fans here in the United States. Yes, there were some of us here that looked past the USA loss in the round of 16. We recognized that this game was something bigger for the most ancient and beautiful of all the Earth's continents. Africa gave us humanity and not long from now the soccer Gods will deliver the World Cup to them.

Remember that this Ghana team is young and inventive. They came from big leagues and teams like Inter Milan, Rennes, AC Milan and Bayer Leverkusen. And when they get older they will indeed be stronger.
Posted by R. Mera Velásquez at 7:29 PM