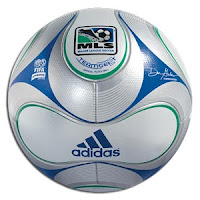 Okay, so a couple of weeks went by without additions to my blog. Been busy but also very involved in all things MLS at the moment. From a friendly I went to between the New York Red Bulls and the Carolina Railhawks to joining the mlsrumors.net team to watching nearly 100% of the MLS games offered via cable (thanks, DVR!) minus HDNet to starting up my own statistical analysis of league attendance, I've had plenty to ingest and process. So where does the league stand? Tough to say just yet. Let's take it one team at a time. (All stats are based on official MLS numbers plus my own statistical analysis for the percentage)

The West
The East

Two comments. One: Ruud Gullit probably doesn't swallow. Two: Whatever happened to the Wiz and the Burn? Back in their day the MLS was less of a soccer league and more like a urinary tract infection symptom.

Very true. Long gone are the days of ridiculous team names like Wiz, Burn, Clash, Mutiny and MetroStars. I'm not terribly happy with the Fire or Revolution names or even the Crew, but nobody's perfect.
As a caveat, other countries have funny names for their teams, such as Comunicaciones in El Salvador, Municipal in Honduras and even my own team in Ecuador: Emelec... which actually stands for Empresa Electrica Ecuatoriana, a.k.a. the Power Company.

I am not terribly surprised that a team is named after a power company. You just wonder how much longer it may be until the players have billboards running electronic ads on their chests.