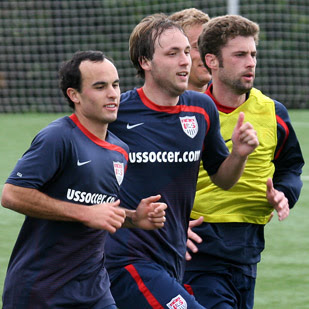 Hi, there. The time has come for my views on what the starting 11 should be. First, I like the idea of having a young, dominant goalkeeper that is seeking greener pastures in some of the more important teams in Europe. I am, of course, talking about Brad "El Guzano" Guzan from Chivas USA (more on what I think of that team's name at a later date) who is being sought after by Celtic (Scotland) and Aston Villa (England). For the defense I have several problems since we lack real dominant players at this point that we have had in the past. Long gone are the days of a good Alexi Lalas, Marcelo Balboa, and Eddie Pope. Instead we have Carlos Bocanegra (I like him on set pieces), Oguchi Onyewu (a little iffy but has more experience), Maurice Edu (young player with plenty of stamina and possibly a great future ahead) and Jimmy Conrad (a surprise pick but I like the way he handles the middle of the defense). Things become clearer with the midfield, which I find is solid for the US squad at this point. I would start Landon Donovan (25 yrs old and nothing short of impressive), DaMarcus Beasly (dominant player in a famed club--Rangers), Clint Dempsey (best US player at this point), and Michael Bradley (coach's son but what a player indeed!). Up at the top I would put Jozy Altidore without question. As to whom I would choose as a companion is a bit more difficult. McBride has retired and Mathis is no longer a viable international. Freddy Adu is more of a midfielder so that won't work either. I also don't like the idea of putting Donovan or Dempsey up front because they are needed for creating plays in the middle of the pitch. I have three other options: Eddie Johnson, Taylor Twellman, and Brian Ching. Eddie Johnson plays more like Altidore (sidelines and quick slants). Twellman lacks the international spark that some other players have and Ching is just not playing that great at the moment. What we need is a downhill player that is opportunistic and dominant in the center of the area. I would stick with EJ at this point. Until we find a real center forward and a more confident defense, I think we'll be stuck in the second phases and quarterfinals of the World Cup (if that).
Synopsis:
Brad Guzan (Chivas USA)
Carlos Bocanegra (Fulham, Eng)
Oguchi Onyewu (Newcastle United, Eng)
Maurice Edu (TFC, Can)
Jimmy Conrad (Wizards)
Landon Donovan (LA Galaxy)
DaMarcus Beasley (Rangers, Sco)
Clint Dempsey (Fulham, Eng)
Michael Bradley (Heerenveen, Hol)
Jozy Altidore (NYRB)
Eddie Johnson (Fulham, Eng)
Posted by R. Mera Velásquez at 11:56 AM

Obviously what you say about Furman's Clint Dempsey is gospel. Does World Cup qualifying start this year or next year? The Cup will be held in South Africa in 2012, correct? I have a good feeling about Somalia this time around, since it is on their home ground. We are talking about the Third World Cup, right? They demolished Rwanda in the final last year.

Haha. Nice. World Cup is in 2010 in South Africa. Qualifying opens this summer against some poor island nation in the Caribbean. It's a three stage process for CONCACAF to weed through the crappy teams.

Alastair McCandless said...
This comment has been removed by a blog administrator.
January 29, 2008 at 9:58 PM

Hahaha. They don't venture out from the middle of the filed because the farther they go, the colder it gets.