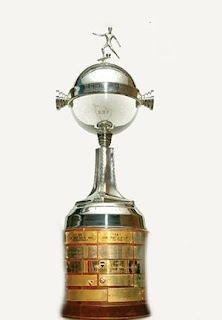 Recently, thankfully, MLS has been linked with a possible spot in the CONMEBOL's Copa Libertadores in the 2009/2010 season. Why all the fuss? Well, let's look at it this way... The Libertadores happens to be the oldest international club tournament and has a storied past with aces like Pele and Alberto Spencer taking part. Currently it sits only below the famed UEFA Champions League in importance. Lately there's been a limited amount of presence by the MLS in international tournaments, namely the CONCACAF Champion's Cup and the Sudamericana. CONCACAF's move into a Champion's League-style tournament is a step in the right direction for our local soccer confederation but the quality of teams will still be limited.
Personally, and I don't think I'm alone in this, I feel it's imperative to have MLS teams participate in the Libertadores for further exposure of our national players and to make international competitions another important objective for league teams. I have no problem with the playoff system currently in place in the MLS but I would like to see the league play time extended by at least one or two months to be more in sync with the rest of the world. Participation in international tournaments will, I think, help to usher in a more standard league time frame. And.... who in South America or Mexico doesn't want to see players like Beckham, Blanco, Angel and other potential high-level acquisitions league teams might make in the coming years?!
Posted by R. Mera Velásquez at 5:34 PM

I knew I would get in trouble for this because I have five different friends in that area, but I knew it was a quick strike and I hadn't seen Paul in forever so I stayed there. I assure you on my next visit I will call or even stay with you if you want. Please forgive me and love live FUTBOL!