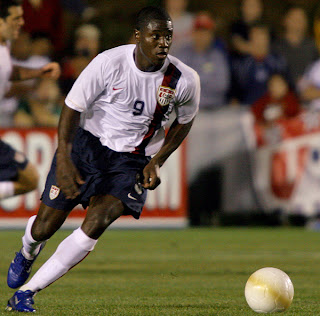 Here we go again. If the rumors (and these are pretty solid) are true then another one of our young prodigies [Eddie Johnson] is preparing to emigrate to better soccer fields. The main interest comes from Derby County and others include Fulham and maybe a minor Spanish team. So, given the information, should we be glad or concerned. EJ has had an illustrious carrier so far. Five goals in his first 2 games for the United States in WCQ 2006! 15 goals in 24 games this past MLS season. I like the idea of having him as one of our regulars with the national team, someone to compliment Jozy Altidore as a second half sub. As to whom we should pick as a starter next to Altidore--well that's another blog. I'm still saddened by the fact that Real didn't follow through with Jozy. But Derby? No offense to their fans, but we have to admit that Derby is worse than subpar at this point in the EPL. Only 7 points! Surely we can come to the conclusion that they will not return to the premiership next season. So are we going to have one of our marquee players in the English second division? I find this disconcerting. Fulham would be a step up, although they also currently reside in a precarious position on the verge of relegation. In fact, were the season to end right now, both teams would be out of the EPL. I'm not quite sure about which Spanish team is also vying for EJ's services. Hopefully it's a top-flight or a least a middle-of-the-road team. I hope that Fulham is able to come to and dig themselves out of the pit. After all, here's where we have Clint Dempsey, arguably the best American player. In any case, I hope EJ makes a good decision... Who knows, maybe he's able to get Derby out of its horrible slump. Hard to imagine, but football is not logical.
Posted by R. Mera Velásquez at 3:06 PM

When discussing Clint Dempsey you must always say,"Furman University's Clint Dempsey." That will make it obvious that he is the greatest player ever.