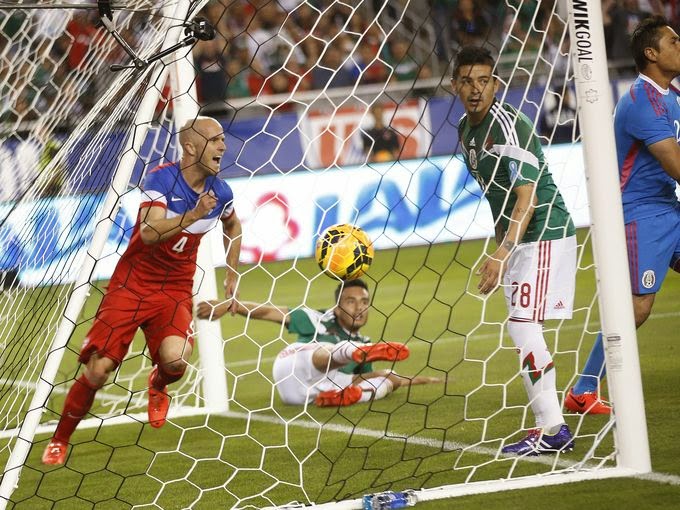 Photo credit: azcentral.com
Ian Darke put it well. At the half, Klinsmann's Team USA looked to be playing some of the best soccer under the current coach. They were sharp, they scored, they defended. Second half, however, was all Mexico. 2-2.

Bradley rules the midfield
Michael Bradley showed again why he was playing for Roma in the Serie A. He was fearless in defense and inventive and powerful in attack. He scored the first and assisted beautifully on the second goal. Without him Team USA will not stand a chance at the World Cup.

Wondolowski is our striker
For all the doubters of San Jose's great forward, today should have put a final seal on their arguments. Wondo can score internationally and he can do so well. He was active, even if with a lack of flair, but he was a poacher and scored the second goal. That's all that counts at the World Cup.

Back line not quite there yet
Do they need Evans and Cameron? Perhaps Fabian Johnson? And how does the best defender, and DP of the LA Galaxy leave Rafa Marquez alone in the box? Gonzalez left much to be desired today and not just on that play.

No Donovan, no problem
Injury or lack of form could make America's most talented soccer player a bench warmer. It happened today and what happened to the team? Nothing. In fact, they fared quite well, actually. Zusi picked up the slack and connected well with Beltran in the 4-4-2. But Donovan did inject an extra dimension when he came on board. So don't count him out yet.

Yedlin in, Green not ready yet
Tonight was Julian Green's chance to make noise in the international scene and possibly book a trip to Brazil. He may yet, but only if the  U-23 team makes it to the Rio de Janeiro Olympics. Green was nervous tonight and made several mistakes. Rookie mistakes, yes. But he's no amazing prodigy for the news media to fall in love with. Not yet. Yedlin, however, was something else. He defended well and his darting runs forward undid the Mexican left flank several times. I would book Yedlin ahead of many others on the way to Brazil.

We need Europe
Finally, yes, our players abroad very much have a say in this team. While the first half may have made us pause with a razor-sharp game, the second half was flat and without answers to Mexico's changing tactics. This is where players like Jermaine Jones, Fabian Johnson, Mix Diskerud, Geoff Cameron and Aaron Johannsson come in. They belong in this squad and make us better. Without them the group of death might as well be called the death sentence.