A deadly group for Team USA at the 2014 World Cup 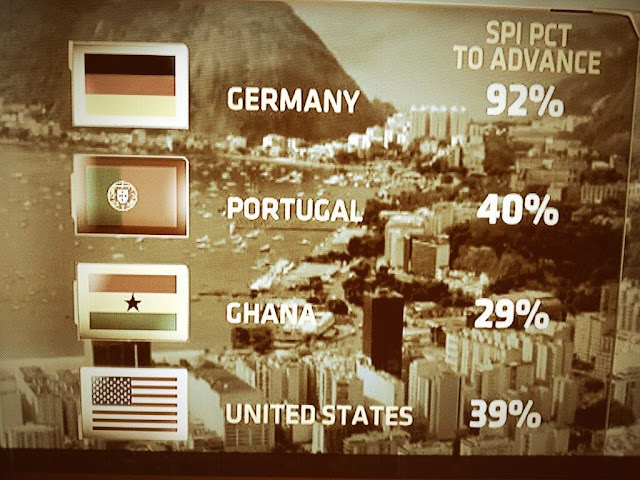 The sorting is done. The magic is about to begin. And now each team knows its fate. The official World Cup draw was held today in Brazil ahead of next year's tournament and it wasn't favorable for the Americans. Their group G includes Ghana, Germany and Portugal.

What do we mean by this?

Drama: First game is versus Ghana, the perennial enemy of the United States in official FIFA competitions, at least for the last 8 years. In 2006 their 2-1, after Dempsey equalized, sent the US packing with just 1 point and only 1 goal scored. In 2010 Ghana had Asamoah Gyan and Kevin Prince Boateng to dismantle Bob Brdaley's weak defense and a hole down the middle after Ricardo Clark's early yellow. It doesn't end there. Bob Bradley managed to lose to them while coaching Egypt in the decisive play-in match in Accra by 6-1. In Cairo the 2-1 was not enough.

Some glamor: Second game is Portugal, with CR7, a.k.a. Cristiano Ronaldo will be eager to avenge the 3-2 shock-loss to the United States in 2002, which made for a magical run to the quarterfinals in Korea/Japan. Now, for the media in the country and the casual soccer fans, this is a great game.

Revenge: The final match is Germany, the perennial favorites. They are without trophy since 1990 and currently boast incredible talent: Mesut Ozil, Mario Gomez, Thomas Muller, Sami Khedira, Jerome Boateng come to mind. Germany also ended the magical run of 2002 thanks to a goal by Michael Ballack and a non-call that should have been a penalty in favor of the Americans.

So what are the tactics? Africa, Africa, Africa. Klinsmann will need to prepare for the African attack and he might want to play a couple of official matches versus Nigeria or Cameroon or Ivory Coast. Klinsmann is never one to shy away from taking chances in unusual friendlies and this game will be the key to this group. If US defeats Ghana then points versus Germany and Portugal wouldn't be unheard of.

Second is perhaps Portugal. The Portuguese haven't been the steamrollers they once were when Figo was still playing. They are, perhaps, a one-man team with CR7 doing most of the work. If he's out then the team is vulnerable. Hence the struggles in qualifying with a tie versus Israel and a disappointing second-place finish.

So how does Klinsmann feel about playing Germany last in this group of death? Excited, he says. Terrifying for the rest of us fans. Does the United States go into this match with an absolute need for a win? Will Germany need a win just as much? Can Beasley or Brad Evans stop Ozil and Muller and Julian Draxler?

Nate Silver of the ESPN Soccer Power Index put it all in statistical terms. Germany almost sure to get out of the group (92% chance), but USA (39%) and Portugal (40%) dead even and Ghana (29%) lagging behind. Us Yanks hope this holds true.

Alexi Lalas had it right when he said that the soccer Gods give and also take away. The 2010 draw was a gift with Slovenia and Algeria as the lower-seeded teams, with only England as the difficult squad. This time the US has a chance to do something special simply by getting out of this group of death. Ever since 1990, every other World Cup has been a dud: 1990, 1998, 2006. The magic happened in 1994, 2002 and 2010. Coincidence or crazy superstition? Can 2014 break this cycle?

2013 was a great year for the national team: wins in the Hexagonal and the Gold Cup and great friendlies versus Germany, Russia and Bosnia. Added to this are new names like Diskerud, Bedoya, Corona and Johannsson. Klinsmann has a chance to prove why this American crew is special and only he can make us believe.