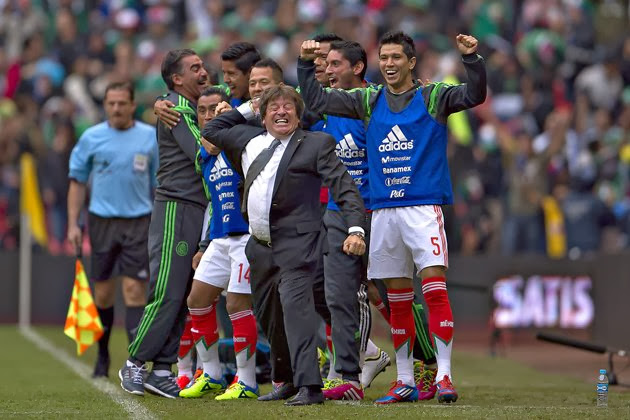 Photo credit: Yahoo Deportes
5-1 shouldn't be an unusual score for Mexico playing at home. Estadio Azteca on a Wednesday afternoon the November before a World Cup would ordinarily suggest a prep game for the tournament. But that wasn't the case yesterday. The Mexican national team was playing for its World Cup qualification life versus Oceania's entrant, New Zealand. How did it come to this?

Blame the poor form in the Concacaf Hex under de la Torre and less-than-optimal performances with Vucetich (Panama win and Costa Rica loss) as well as the non-issue that was Luis Fernando Tena's game versus the United States. All chose the same defensive, cautious style and relied on overpriced, over-hyped Europe-based players like Chicharito Hernandez and Giovanni Dos Santos.

In comes Club America coach Herrera and all bets are off. Herrera is a pupil of "Lavolpismo," a style of play first introduced by Ricardo Antonio Lavolpe and which preached attacking football with limited defense. It had mixed results for Lavolpe with the Mexico national team but made for entertaining soccer.

Another thing Herrera did which upset many people, even though it may not have surprised many, was the selection of purely national-based players for the play-in games versus New Zealand. Gone were the Chicharitos, Dos Santos and Guardados and in came ten players from Herreras's own Club America. He needed consistency, he said, in order to be successful and he claimed that the foreign-based players had too far to travel and that this diluted their abilities.

The win gave both hope and relief to the Mexican nation and confidence that their recent trophies in the u17 and u23 tournaments were in fact based on the reality that Mexican soccer that is on the rise. But what are the major takeaways after the win and the certain qualification?

First thing is addressing the foreign I players. Will they continue to be a part of the system? Certainly come World Cup prep time they will have time off to get acquainted with Herrera's style and manners. Will they acquiesce to the three man back line? Can they survive in that formation versus a team like Belgium? Perhaps another point here is the absence of  Carlos Vela. Will he turn down being at the World Cup? Does Herrera even need him there?

Mexican soccer needs to answer some serious questions ahead of the tournament. Is their structure a viable one where very few people control the direction of the national team? A serious failure at this point is going three and out at the World Cup, and the way teams are stacking up in terms of death groups, this isn't out of the question.