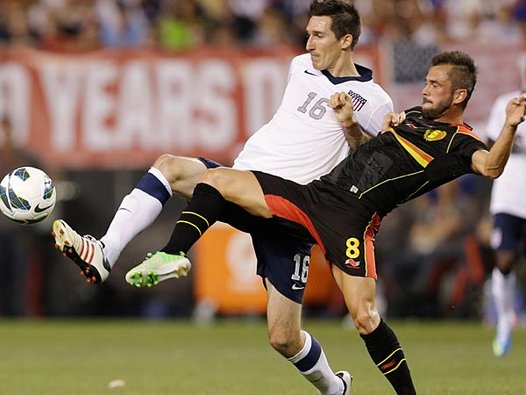 The game started slow enough this evening in Cleveland, a town not known for soccer. A defensive mistake by Geoff Cameron and Omar Gonzalez allowed Mirallas to put a sublime touch on the ball to get it over Howard for the first of the game at just 6 minutes. It looked like a rout.

Team USA had a hard time for most of the first half hour with Belgium controlling most of the possession. Fellaini, Kompany, Lukaku, Dembele and Defour made it look simple and Klinsmann had to scramble for answers. Enter Geoff Cameron in the proverbial set piece and goal for the US. Sadly, Jozy Altidore was never able to establish himself in this match and he was subbed again at halftime, continuing his scoring drought that goes back to November 2011.

The first half ended better for the United States with good play out of Beasley and Jermaine Jones and Zusi and Dempsey waiting to pounce. The second half also started well with Brad Guzan in goal until Omar Gonzalez committed a terrible mistake in lightly touching the ball away while moving towards the USA. The Belgians pounced and Benteke was gifted a perfect ball that he just tapped in. From there, the Americans tried to pull back but the real Belgian team showed up. Great goals by Fellaini and another by Benteke in highlight-worthy moments.

Why are these learning pains? For one is the continuously evolving/revolving back line. Klinsmann went with Cameron at right back, where he plays for Stoke City, Beasley as left back and Goodson and Gonzalez in the middle. Goodson brings experience but he showed slow and disconnected. Indeed, everyone seemed disconnected from Omar Gonzalez, even Omar himself with Belgium's second goal. Cameron is clearly not meant for right back and that position should go to Chandler or Lichaj. Parkhurst has not been in action so he probably should not play at that position.

DaMarcus Beasley had another stellar match tonight. Maybe not so much because of his defense, although he held his own against a superior side. No, it was the dribbling around players like Vermaelen and Mirallas and unleashing his speed down the flank that allowed for plays that ultimately led to Dempsey's PK late in the match. It might be a good idea to have Fabian Johnson and Beasley control the left side for now. They can both play the wing and defend well. Ironically, it's the middle and the right that trouble Klinsmann. Not long ago we had countless talks about the problem at left back and how we were stacked elsewhere.

If the US is to build around Gonzalez as a fulcrum then Gonzalez will first need to clear his head and understand that he is the captain of the defense. Second would be moving Cameron to the middle where he excelled and won his place with the national team and earned his passport to Europe. This should be the start and perhaps we'll see something to that effect in the game versus Germany coming up this Sunday.

The rest of the team had a pretty muted match. Attacks came from Beasley and Jones with Dempsey and Altidore/Johnson/Boyd providing the final attempt. Clearly there was something or someone missing. One can make the case for both Michael Bradley and, yes, Landon Donovan.

We were outclassed by an excellent team last night. I'm not sure what we learned. Goal scoring is still a problem. I think our best hope is to control the ball through the middle with Jones, Bradley and Dempsey. Those guys are our strength right now and need to get on the ball and distribute from the inside out.

Agreed, this is perhaps the best squad Belgium has ever fielded, certainly it is in my lifetime. We do not currently have the talent and depth to compete with them or Germany, who will also probably drub us.