The Replacement Point: USA ties Mexico at the Azteca 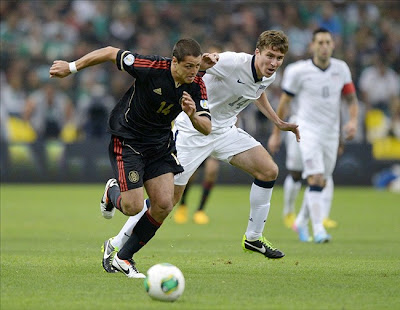 Juergen Klinsmann stepped into the Coloso de Santa Ursula undermanned and underhanded. Team USA was missing Landon Donovan, Tim Howard, Bocanegra, Clarence Goodson, Cherundolo, Chandler, Fabian Johnson and Jermaine Jones. It looked , once again, like a squad meant for an exhibition match. And yet, like so many others in the recent past, they pulled it off and brought a golden point home from Mexico.

As Alexi Lalas so eloquently put it, this was a true "American performance." Defense, placement, goalkeeping and luck. Yes, luck. That was a penalty committed by Maurice Edu, but often that's the sort of decision that goes against you. Today it favored the Americans.

Starting at the back, replacement goalkeeper Brad Guzan performed admirably, although with far less saves than Howard last August. Why? Because the Mexicans were lacking in true definitive moments. Chicharito never put it on frame and the lobbed balls nearly always met Gonzalez or Besler. And that's where the Americans excelled the most. Omar Gonzalez and Matt Besler were a formidable tandem in the middle of the defense. Indeed, it's hard to imagine that up until tonight, they amounted to 6 caps for the national team--together.

The flanks also surpassed all expectations. Geoff Cameron is no stranger to the right back position, he is often played there for Stoke City. DaMarcus Beasley has played left back before and although he's not a natural defender, his speed and left-footed abilities, coupled with experience in the Liga MX, poised him for another good night. It could have gone badly for him but the veteran fought the Mexican attack and several injuries to preserve the tie.

The midfield was just as important for the defense. Michael Bradley once again stepped up to be the leader of the team, even if Dempsey is the captain. Maurice Edu had a tougher job standing in front of the defense but his time at Bursaspor and his experience with Bradley helped him to control the withdrawn midfield.

But the defense did not stop in the midfield. Herculez Gomez maintained possession to give the team time to regroup in defense and attack. Graham Zusi, quiet for much of the game, pulled off a sensational interception as he ran back 40 yards to head away a center that could have ended as a goal if the Mexican attacker had connected. And Clint Dempsey was himself, always dangerous, always drawing attention. Even Altidore held up the ball and defended in corner kicks. He was unable to score but still showed how much he has evolved as a player.

So yes, this team was very much about replacement players, especially for 3/4 of the defense. It was a replacement of a team that had struggled in the first phase of qualifying even when at full steam. A replacement of the fear of playing at the Azteca with the notion that one can win anywhere in the world and against any team. That's the true American spirit, and it may have replaced the naysayers and critics. But much work needs to be done. This tie means nothing without a win or at least a tie versus the Aztecas in Columbus. It also means nothing if we do not qualify. So let's not replace everything yet, this tournament has just begun.

Great week for the team, but as you said lots of work left to do. Beasley played his heart out at left back, but he wasn't the answer, he was beaten several times by the Mexican winger (Aquino?) and better crosses by him could have easily led to 2-3 goals. Gonzalez and Besler did an incredible job of cleaning everything up and the Zusi play you mention was indeed outstanding. Should be interesting to see who the 11 are when we play again in June.