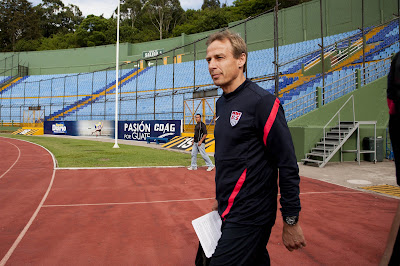 If you are a fan of the US Men's National Team, the title of this post should say it all. Ahead of the most important game in qualifiers, Juergen Klinsmann lost 8 players, some to injuries, others to inactivity. More importantly, there will be no Howard, Fabian Johnson, Bocanegra, Chandler or Donovan.

This is the team called up for the games:

It's true that Carlos Bocanegra is on his way out, so that absence may not be as significant. That the team has lost Tim Howard, the perennial US goalkeeper, and the flanking Germans Johnson and Chandler, puts the team in a potentially-messy situation. Half of the defense is gone. How does the team face Costa Rica and Mexico?

It seems like we have done the left back position story too many times before. When Fabian Johnson took the spot, it seemed to fix the problems. And yet the team has still struggled on that side. Indeed, even the much-maligned Timmy Chandler didn't live up to his Bundesliga talent at right back versus Honduras last month. So were they the permanent fixes? Are we missing Cherundolo that much? May it be that the left back is still up for grabs?

With Klinsmann's team there are always more questions than answers. One thing we may not need to worry about is talent from the midfield up. In the absence of Donovan, Dempsey has taken up the slack by scoring goals and controlling play. The American ace's absence has also given rise to players like Graham Zusi, Brek Shea and Joe Corona. Up top Jozy Altidore and Terrence Boyd are potent European-based forwards and Eddie Johnson and Herculez Gomez are getting things done in the New World for Seattle and Santos, respectively.

And what about Tim Howard? Yes, a casualty of the Premier League and a terrible loss for the US. Then again, these things are going to happen and Brad Guzan, likely to start, has seen his share of action as a starter for Aston Villa in the Premier League. Only communication should be a factor for him, his hands already know the job.

So, do we look at these upcoming qualifiers with optimism? Hard to answer. The back line sounds more like an experimental friendly-type roster as it is. Beltran, Morrow and Besler all have one international cap: against Canada in a friendly in January. Omar Gonzalez just got to know Cameron and it's likely that Cameron might be deployed on the flank, where he has played for Stoke City.

The midfield options have a couple of defensive options: DaMarcus Beasley and Maurice Edu. Beasley has seen his share of games as a left back, and although he hasn't shined in that spot, his experience playing in Mexico should speak volumes for him. Maurice Edu, on the other hand, has plenty of experience at center back, including a famous win last year versus Mexico at the Azteca. So a back line of Beasley, Goodson, Gonzalez and Cameron in that order isn't so bad. Not perfect but not bad.

But there are missing giant-slayers in this squad: Donovan and Howard. Without both of them we are looking at the next American national team. Anything short of three points in the next two games might make a trip to Brazil highly tenuous. There are giants to defeat: Chicharito, Guardado and Dos Santos for Mexico, Bryan Ruiz and Joel Campbell for Costa Rica. New slayers will need to rise.
Posted by R. Mera Velásquez at 2:25 AM

I think they will rue not keeping Bocanegra around for these games. His experience and the stability he brings will really be missed. True he is older, but none of the others have done so well as to force him out to pasture yet.

True, but it could go either way. If he did play and it cost the game then we would blame him and Klinsi for it. He's not a Maldini or Roberto Carlos, although he is our American version of them. Perhaps it's time for him to come home to MLS and be active here.