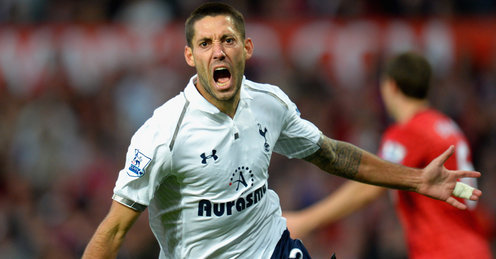 Some dreams are worth dreaming. Some scores are bigger when the game ends. Some players are just special. That was US international Clint Dempsey today for his new team, Tottenham Hotspur. Dempsey scored the game-winner against Manchester United at the famed Old Trafford and re-wrote the role of Americans in premier club soccer.

Clint Dempsey's goal was special for several reasons. Besides the obvious significance of the rival, the very fact that the game was at Old Trafford and one that the Spurs had not won since 1989 elevates Dempsey's goal. Additionally, it brings Tottenham up to 5th place after a 3-game winning streak. It is a credit to Villas-Boas for acquiring the US international and starting him in important matches.

Dempsey has a knack for scoring important, if we may say, scavenger goals. He seems to always be at the right place at the right time and has the presence of mind to adjust the speed and strength of his shots in order to break the goal line. This is what has made him such a threat during his career. Dempsey took his time and remained focused during a transfer season that he saw as his last chance to play for a major team in Europe. An 11th hour move to Tottenham was what he deserved, and after starting 3 matches, he found the back of the net in style.

This is an American breakthrough because of who Clint Dempsey plays for, for his abilities on the pitch, and the path behind him. He elevates other Americans abroad playing for important teams like Michael Bradley (Roma) and Jozy Altidore (AZ Alkmaar) and sets up higher expectations for future United States talent. Dempsey has given us his share of important goals, from recent games in World Cup qualifying, to his goals for New England and Fulham, to unforgettable strikes versus Egypt and Spain at the Confederations Cup 2009, versus England at World Cup 2010, and the winner versus Italy on Italian soil earlier this year. He has added to his repertoire today by scoring for his latest, and most impressive club in the best soccer league in the world. Dempsey is pure American magic and we haven't seen all he can do yet.