No Gonzalez and no Donovan means no Galaxy 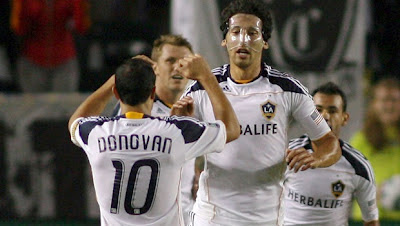 A star -studded LA Galaxy won the MLS Cup in 2011. With many of its main pieces returning (Juninho, Beckham, Donovan, Franklin, Keane, Gonzalez), most thought they would be unbeatable once again. A key injury to Gonzalez, however, has shown this team can be overcome once again. Would Toronto have knocked the Galaxy out of the Champions League if Gonzalez was defending? Would they have lost at home to Real Salt Lake and New England Revolution? Tough questions but worth asking.

There is another integral piece to the Galaxy attack: Landon Donovan. Tonight, as the unseasonable drenching rain enveloped the Home Depot Center, the Galaxy lacked the offensive arguments to come back from 3-0 against a rebuilt Revolution. Cardozo hasn't been the answer when called upon and Mike Magee came in as a substitute due to his own injuries. What will happen to the Galaxy once there is no Beckham and Donovan? Even without Beckham or Keane things worked fine with this team. The addition of Buddle has had a few kinks so far but he has been able to score.

In the end, the reason for the Galaxy's defensive woes lie with the absence of Gonzalez. De La Garza is not fit to be a center back without his sizable partner and Arena has made it known the former Maryland player will likely be moved to the wing. Reviewing the different goals scored on the Galaxy it is clear to see that Gonzalez's aerial strength and awareness could have made a difference. The Revolution's Sene's goal, for example, was a vintage Gonzalez defensive moment. Such a free header is hard to come by when the corpulent defender is on the pitch. Another missing piece is the ability of Gonzalez to score off headers in set pieces. He and Beckham made quite a tandem on several scoring situations in the past.

With Leonardo a couple of weeks away due to injury, Bruce Arena's options in the middle of the defense continue to be thin. Perhaps a trade might need to occur before the end of the market window in MLS. As for the absence of Donovan things are even more interesting: no spark, speed or fantasy.
Posted by R. Mera Velásquez at 4:29 AM

Did you call their defender fat?

In this case it's just a big guy. Corpulence can be used to mean this also. Now, classic Ronaldo is corpulent of the sideways variety.