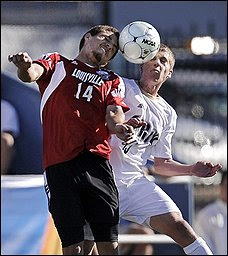 There may be no promotion/relegation in America's professional soccer league system. The Portland Timbers and Vancouver Whitecaps are entering MLS as expansion sides, not as promoted squads from the USSF-2 lower division. There is also a rising tide of player development within MLS teams, but nowhere near enough to have significant homegrown talent. But American futbol has another type of soccer: the College game. Today, Akron prevailed by the score of 1-0 over Louisville and are now the NCAA champions.
Caldwell's strike in the second half gave the Zips the only goal of the match in a game that was largely controlled by the Ohio team throughout the first half. Louisville could have scored at least twice in the dying moments of the game in front of an open net. In the end, it was a deserved win for Akron and its outstanding coach: Caleb Porter. The Zips could and should have won last year but were defeated on penalties by Virginia.

But what is the real importance of the college game? How does it affect US soccer? Very much so. If you are familiar with certain names: Dempsey (Furman), Charlie Davies (Boston College), Carlos Bocanegra (UCLA), then suddenly it becomes obvious that significant talent can be found in this player pool. It is also a means for MLS to acquire the best talent available in the United States, even international players like Zakuani and Ngwenya. The US' love affair with "college draft" is preserved in the American soccer league and it deserves credit for portioning talent in an equal manner for all MLS teams.

There are some caveats to the college game, however. For one, there are the "time outs" and countdown clock. These two are as American as apple pie. There's no such thing in the world's game. Even if there are 45 minute halves, the fact that these rules remain in place surely subtracts from the league's reputation. It thus places it as an afterthought for many American fans of the game and even more so for the rest of the planet.

How long will the college tournament last in its relative prestige? With the increasing player development in most MLS teams, the situation for college players changes a bit... or does it? Maybe it should be regarded for what it is: a lower division full of youngsters eager to make the jump to professional soccer. If the NASL (formerly USL and USSF-D2) is the "Championship" or "Serie B" of the USA, then the NCAA is the "League One" or "Serie C" of US soccer. Or is it more of an alternate second division? In the end it means this: more players, more talent.
Posted by R. Mera Velásquez at 6:26 PM