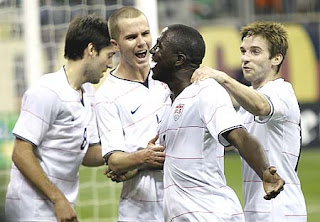 What a game indeed. Except.... where was our midfield? Our attacking midfield was spotty at best last night. Michael Bradley was nullified by the Mexican defensive midfield and Landon Donovan seldom saw the ball (although we did see some flashes of brilliance). Bobby Convey did not look sharp enough to have started and I would have put Beasly in if he had been available. I don't feel Lewis was the answer either. I think Edu should have started further back from the midfield in the center ahead of the back four. Ricardo Clark had a good game but this sector of the field requires some work. It could be that some of our Europe-based players had too little time to rest after seeing action over the weekend; such was the case for Dempsey. He was absent from play except for the goal that did not count. I still don't feel he should be a forward but at this point we have no real company for Altidore. The defense had some gaping holes around the middle when it came time for set pieces. More experience is needed in that part of the field and Conrad could have filled that role. Speed was the key point that Bradley suggested to be lacking in the US team. I feel the same, although more dominant flanks in our defense should be addressed as well. I concur with the need for a tighter central defense...Gooch needs to step up if he wants to keep playing. Up top Altidore was anything short of perfect... Opportunistic, with presence, and most of all with passion. Getting a yellow card was exactly what he needed. It showed his strength and poise when confronted with an important game like this. We can only expect more fantasy play from him in the future and it is my hope that he can move on to top-flight European club team during the summer transfer window (Real, are you listening?).
Company up front for him is sorely needed and although I'm not sure about EJ playing alongside, I think it may be worth a try.
Posted by R. Mera Velásquez at 10:40 AM

They should never have taken away Dempsey's goal. That ref clearly had an anti-Furman bias.